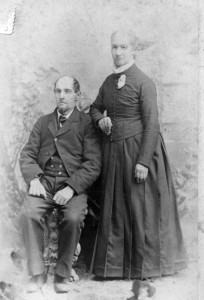 It all started with Jake looking at Adam’s family tree chart at Applefest and asking his dad why all the lines were pretty long except one – the Holwecks.

Not sure what Jon’s reply was but his response was right on. He said they should look it up and see what they could find. There is so much more info out and available now because of records being made digital and because of indexing. Well, Jon hit pay dirt – he found the birth record for John Holweck with his parents. Up until now we have had no idea where John (or Joannes in the record) was born or who his parents were. Rob has been working on it and has had a couple of leads from material that I had stuck in that file at one time. Well, curious, I checked out Jon’s lead and was able to find most of the family.

Jon found two more members in his research. So, we not only have John (Joannes) as the oldest of 10 siblings and the parents. We should have the whole family now and a very interesting home town that dates back to Roman times and was given that name (Sankt Ingbert) in 888. John and Josephine Holweck have a very interesting story. Here now is the next generation back. The names are spelled the way they are because the Holwecks were Catholic and the names are Latinized.

The History of Grandpa Fullmer – part 1