The History of Grandpa Fullmer – part 1 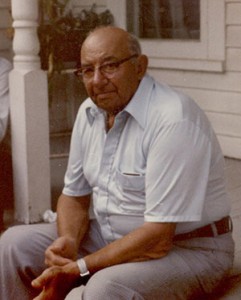 James Ira Fullmer as many of us remember him.

I loved my father James very much and always felt lucky to have him as my father. We didn’t always agree and sometimes I could get angry with him, but I rarely expressed it to him. I could count the times that I knew he was angry at me on one hand and have fingers left over. He certainly had reason to be angry with me more than he did and I appreciated his understanding when I needed it. Learning about my father was a lifelong experience as I would find out things about him that I did not know even well after his passing. Nevertheless he was a fascinating person to me always and a fun loving, hard working, intimidating man who lived during a time of great change and who had to reverse many of his long-cherished beliefs about how life was to be lived.

James was born in Packwaukee, Wisconsin to William and Elizabeth (Holweck) Fullmer. He was the youngest of nine children. William was a blacksmith who owned his own shop in Packwaukee. Dad had pointed out the house they lived in when I was young, but I couldn’t identify it now. I believe James went to grade School in Packwaukee and left school after the eighth grade which was not uncommon in those days. He told my brother that he had actually started high school. Some people in the community began complaining that students weren’t getting enough homework, so teachers started to increase the homework. Dad finished his before the end of the school day so his teacher gave him more. Dad said that the teacher was being unfair to which the teacher responded, “if you don’t like it, quit.” Dad quit but told John that he wished his dad had made him go back, but he never did. Dad always thought that an education was something he had lost. He apparently vowed that his children would all receive a good education, which was realized with all of us. During this time, William bought a farm a few miles west of Packwaukee which was located along highway 82, just west of the current exit with I-39. The farm was a fruit and vegetable farm and was a farm that I visited as a child and even worked on with my uncle Herb who ran the farm until his death.

Young James certainly seemed to like farm life. He certainly saw himself as his mother’s protector and loyal son. William would spend winters in northern Wisconsin working as a blacksmith in a lumber camp and would return in time for spring planting. William did his share of drinking and fighting and James did not always appreciate how William would treat Lizzie, especially when he had been drinking. I never heard of any violence in the family. One such story goes like this: “Dad came home drunk and mother needed him to take care of something. He must have said something that upset her as he walked out the door because she started crying. I think I was twelve and figured I would set dad straight on just how he was treating mother. I found him slumped against a tree in the orchard and with all the authority and righteousness I could muster, I said, ‘Dad, mom wants you in the house and you need to get going.’ Dad opened his eyes and sat up looking me square in the eye and said, ‘You come to get me boy?’ I was hoping he wouldn’t get up because he seemed bigger than ever to me at that moment and I knew I was in this way over my head. I just walked away and he came in a little later.” William was a tough guy and rarely lost fights but James remembered him returning from a fight that he lost and it took him sometime to recover. Hearing these stories gave me one point of view about what life on the Fullmer farm was like but it would be countered many years later by a distant relative, Mabel MIller, who grew up on the farm next door. She thought William and LIzzie were the best. She described them as warm, loving, funny and kind where she always felt welcome. Times were very hard on their farm and they were always helped out and looked after by the Fullmers. She had only the fondest memories of the Fullmer family.

Once out of grammar school, James went right to work for the neighboring farmers. One thing he knew to do was to work hard. By the time he was 16 he had bought his own car, a Model T Ford and he told me stories of him taking things from the farmer he was working for to the train in Westfield. If he was late, by driving the back roads at 65 mph he could beat the train to Oxford. This car gave him freedom and popularity. He told me once that while working on the Old Frank Russell farm (the Hance Russell place now) he would drive kids in the area up to Stevens Point for dancing (60 miles away) and often get back to the Russell farm just in time to start the morning chores. Frank approached him, grinding his teeth, and told him he was concerned that Jim was gone all night and that he better stay home. James responded by asking Frank if he had any complaints about his work or if something wasn’t getting done. “No, I have no complaints. You are doing good work.” “Well then,” said James, “I’ll do what I want at night.”

Sometime after this he hired out to a farmer in Endeavor, Wisconsin. He told me the name but I don’t remember it. It is one of my favorite stories about my father in his youth. While on the train from Westfield to Endeavor (15 miles or so) he began talking with a young man who hired out like he was. The young man knew the farmer Jim was going to work for and told him he could be real difficult to please. He told him not to be disappointed if no matter what he did, it was not enough. The farmer met Jim at the station and showed him around the farm. They passed a large stump of a tree near some out buildings that was clearly in the way and had been worked on a lot but apparently it wouldn’t budge. Wanting to impress his new boss, Jim claimed he could blow that stump out of the way in one try. “No you can’t” said his boss. “I have plenty of guys work on this and I’m just going to have to live with it.” “But I can blow this stump. I done this lots of times on our farm” argued Jim. “Well I don’t think you can but there is powder and whatever else you need so go ahead and try.” Jim did and made a packing but was too much in a hurry and did not let the ashes he used to pack the gun powder dry enough. He put the pack in the stump and the powder flared but did not explode because there was too much moisture in the pack. “I knew this was a waste of time. I knew you couldn’t do this” said his boss. Now Jim was mad. He knew what the problem was and pleaded to try again. After much argument he was allowed to try again. This time he made sure everything was perfect and, while he knew how much powder to use, he added a lot extra just to make sure that the stump disappeared. The moment of truth came. He instructed his boss to get behind the corner of a nearby shed. Doubtful of this young boy’s ability, his boss stood by the corner but not behind it. The stump shattered into thousands of wooden missiles, breaking windows and punching holes in shed walls. One large piece hit the corner of the shed his boss was standing next to. The boss was blown back but amazingly suffered no damage. He was ecstatic that the stump was gone and did not express any concern about the peripheral damage. Jim, however, fully realized how close he had come to killing his boss and vowed to use more discretion in the future.

James was certainly a part of elaborate halloween stunts, the largest of which involved stealing a car and hoisting it to a roof of a barn. The car belonged to William Hamilton or Buffalo Bill as everyone called him. He is Ruth Fullmer’s uncle. Bill, who was famous for driving very slowly, was an excellent hunter, trapper, and woodsman. I can attest to this because he still drove that way when I knew him. (He taught my brother and I to trap and also how you find wild bee hives.) Jim said that when he and some friends got Bill’s car started and stepped on the gas down the road, they left a trail of glowing embers as the car had never gone that fast and carbon particles had built up in the exhaust system. Using ropes and a hoist they somehow managed to get the car to rest on the peak of the barn roof. My mother remembers this event as Bill came over to her home to get her father James to help him find his car.