Yesterday, Saturday, was Spring-like for a February day, 40+º, melting, puddles, mud. I was actually home to enjoy it. I had plans. We stripped the two guest beds and our bed. Hung the quilts outside to freshen. Put in two loads of bedding right down to the bed pads.

We had gotten an early start, so after that I baked some oatmeal raisin cookies. My next planned project was cleaning the office. Then about 10:30am, the phone rang, our land line.  We had just sat down to put our feet up for a bit while the cookies finished baking. Norm answered and handed the phone to me. He said it is someone about the museum.

It was a young lady who was in the area taking pictures of Westfield for a 99-year-old lady who grew up here, and was in a nursing home in Arlington Heights, Illinois. Would there be any way that she could see the museum. We get those requests from time to time, and in my mind, I was going to see if Uncle Neil was available. Remember, I had projects in mind for the day.

I am not sure what made me ask, but I said, “Who is the lady who grew up here?”  Her response was “Martha Jost”. “Do you know who her father was?” I asked, “She may be related to my husband. His grandmother was a Jost.”

“Yes, her father was Ted,” Jessica, the young lady said. “Were there twins in the family?” I asked. “Yes,” she replied surprised, “Martha is one of them. Her sister Lydia was the other.” “Oh my gosh,” I replied, “That makes her a first cousin to my husband’s father.  We can show you lots of things to take pictures of that relate to Martha’s family.”

So we met in the afternoon, brought her the information that we had on that family including a pedigree chart to show Martha her parents, grandparents and great grandparents. We showed Jessica the museum and then took her to the cemetery, the old high school (we knew she would have graduated from that school building because she was in the same class as Aunt Vaudice Fuhrmann Mills), the farm area that Martha would have grown up on across from Cant Hill (it is no longer a farm), Cant Hill where Jessica knew Martha always went sledding, Thal Acres where Martha’s dad would have grown up (of course it was a farm then and not Thal Acres).

In my notes, it was Aunt Vaudice who had showed us the area of the Ted Jost farm. She remembered the twins as being very artistically talented and pretty.

We exchanged e-mails, phone numbers and hugs. Jessica is going to see if Martha can fill in any information on that particular family group, possibly scan me some pictures at least of Martha and her twin. Jessica was so excited. We were so excited.

This was not just a chance meeting. The Jost family was the line that we were working on when we went down to Farmington. It is the family that I have been entering information on into Family Search. Interestingly, when I was making up documents for Jessica to take to Martha, I realized that I had all kinds of information on her family in the Reunion program on my desktop that had not been entered into Family Search. I would have missed it entirely. It makes the hairs stand up on my arms to realize just how thin the veil is at times. What a great experience! Thanks to whoever up there was putting this meeting together. Family History is indeed Rad! 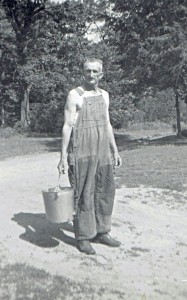 This is a picture that was taken by my sister Rosa one hot June Sunday morning back in 1956. My dad had to go out after some milk for the house. He slipped on his overalls and out he went. The overalls are how I remember him the most. Usually there was a blue work shirt under and some work boots instead of the slippers. There were times when he was dressed up. He had a Sunday suit, but the overalls were his everyday apparel.

I remember one time his saying that the overalls had saved his life. He got too close to the auger for the corn silage to be blown up into the silo. It caught the overalls and jammed. He was very grateful that it was not his leg, arm  or any of the rest of him. I don’t think this is that pair of overalls because they were pretty much chewed up, but notice the patches that Mom sewed on this pair. He had several pair of overalls.

Aunt Eloise has passed at 95

Here is a photo from 2007 and some memories written by my cousin Joyce Kruger Natzke, Bonduel, who is also in the photo. 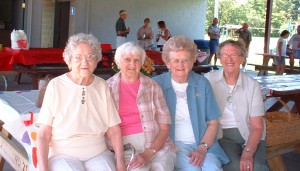 Just my Aunt Lucille, the one I consider to be most like my dad Kie – she is a real card – and Joyce are the only ones still here.

“Word came yesterday that Aunt Eloise passed. She was my Dad’s youngest sister, and spent about two years with us, at the age of 18, running our household. She married Ivan(Pete) Quinn on the lawn at Grandma’s.on Nov. 15, 1941. Not long after that he was drafted and served in WWII. Actually 4 of the Quinn boys were in the army, and I remember Mrs. Quinn had four stars in the window. Pete was sent to Iceland and I know one of  the boys was in the Pacific. While they were gone, Eloise and her friend, who was married to another brother, Ellis, decided to join the war effort too. They went to Chicago and were two of the “Rosie the Riveters” that you have probably heard of. She was 95, and her birthday was in June, so almost 96.
“One thing I remember about the wedding. After the ceremony, she exclaimed, “My flowers!” She had forgotten them in  the house!” by Joyce Kruger Natzke

On the right is my brother Neil and his wife  Pat. But on the left, is our first cousin once removed and his wife – Loren King and Shirley. There is such a family resemblance between Neil and Loren. Our grandfather, John Fuhrmann and Loren’s mother Lorena Fuhrmann King were brother and sister.

Lorena’s husband, William King, was a minister and a really fun person to be around. At the end of their life, Uncle Willie and Aunt Lorena lived on Lawrence Street in Westfield in the same house that Great Grandma and Grandpa Fuhrmann lived in.

I don’t know if I could ever find it, but somewhere I have a tape that we made with Mom (Alta), myself, Aunt Vaudice and Great Aunt Lorena. Aunt Lorena was not all that much older than my mother – ten years. It was Aunt Lorena who shared her obituaries and other family papers with me. One obituary was for my Great Grandpa Kruger. No one else on the Kruger side seemed to have that document. 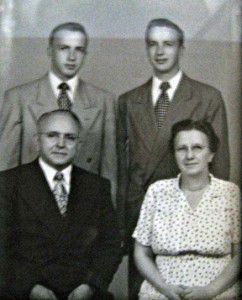 This picture of the family was probably a scan or picture taken with the photo still in a frame under glass (not by me), but I thought it was worth putting it in here. In back Loren and Virgil King. In front Great Uncle Willie and Great Aunt Lorena Fuhrmann King. Willie King is related to me through the Boniers. Aunt Lorena is my grandfather John Fuhrmann’s sister. They are not related to each other.